Science of THE  beginning of human civilization

Reviving the ancient manuscripts of Atlantes

Really learning to talk
With God of universe.

Science of beginning of human civilization.

Explanation of the "Magic Session" video on the main page:

In our world there is only "One Physician", who never makes mistakes – this is "God", acting in our body, as "World Forces". It operates "Free" and "Always". And if you taught "Your Hands to Talk to the Energy System of organism", according to the Atlanteans system of ancient Egypt, then: You have a chance be "Healthy and happy" all your life, delivering Water and Food to the body in sufficient quantities, and without destroying the body with Recklessness. Remember, that must be a Soul Relationship with "Your Inner God"! And your gratitude he must feel every day!
It so happened that I, as the creator of the site "The Science of the Beginnings of Human Civilization", can be compared with Heinrich
Schliemann 21st century, which proved, that Homer's Odyssey is a description Realities. Because, the people of Israel, to which I belong are
called the "People of the Book". And I proved, that "Torah is like a scientific book of Atlantis", describes the "Processes of Action of the human cell"! And in my proof "All logical contradictions of the sacred text are resolved"! And where the most beautiful proof is description of
Mitochondria in the book of Numbers.
I was able to prove, that the "Book of the Dead" of ancient Egypt is the scientific information of the Atlanteans, describing the "Practical Magic Energy system of man", which I use to promote health, and as a daily conversation with the God of the Universe

The topics on this site describe the "Scientific Information" left by the Atlanteans through the manuscripts of ancient Egypt and Israel.
The Atlanteans founded the Human civilization on earth, delivering the "Genetic Material" to the planet. And they were known to people - as the "Gods" of the ancient Epic among all peoples.
The topics discussed on the site are so global, that they concern all people of the planet, since discuss the shortcomings of Science, Religion, Ecology, Climate, Overpopulation and Society - State.  And at the same time, each Person will find for himself personally - "The way of Self-education of the Personality", which was left by the Atlanteans.
The main theme of this site is "Scientific Scrolls of the Holy Torah", left to us by the Atlanteans, who describe the "Miracle of Living Nature - the Cell". A miracle, that "Reproduces its Systemic structure" and therefore the world of the Living is capable of being Eternal!
Some of articles about Egyptian Magic on this site, will help you understand and feel "Music of the Universal Forces", operating within our body. Mastering Magic will help you not only improve the body, but also understand more deeply our World and the meaning of our life. They will help you to feel like a "Divine Human".
The scientific understanding of the Sacred Torah scrolls, as it were, brings it down from the "Heaven Fantasy" and lowers it into the "Real life of Nature and People". Therefore, people who do not believe in the existence of God, this will help him "Understand and really make sure of his Existence". For believers, "Scientific understanding of the Torah scrolls" will help "See real actions of God", and this will destroy Religious Fanaticism. And all the people of Israel will be able to unite around the "Sacred Torah Scrolls" as people's roads to "Perfection".
The most difficult things in understanding of the Universe become Simple, when they fit into a single Puzzle of Meaning, and this site is an attempt.
Dear Reader. This site appeared thanks to two articles: “Torah – Scientific Book” and “Systematic construction of the Hebrew language”. Work on articles gave me the “Scientific weapon of Thought”, and at the same time “New vision of the science of the ancient world”.
The unique system of "7 days of creation of the world", which is humanity received from another solar system in antiquity, is the Only model building our world. Therefore, this model allows us to create a "Single scientific description for all branches of modern science"! Which, in turn, allows reducing the time learning of younger generation for many years!
The Scientific goal of my website is to put as much material as possible about the “Science of the Beginning of Human Civilization”. Only this ancient science, transmitted to people, which is the experience of billions of years human existence in other solar systems, can save our planet from the stupidity of people. And therefore I will put here my “most important short  articles” or “excerpts from long scientific articles” in order to get the “General picture of ancient science”.

I hope the reader will find useful and interesting thoughts on site.  But of course the most important thing for every Person in life - this is "Understand yourself"! And for this purpose I put, a simple scientific explanation of "God" - which is inside each of the People!

Simple explanation of the Gods of the scientific Torah.

In the scientific scrolls of the Torah of Atlantis, 2 active gods are described in Man, and this is the god Elohim and the god Jehovah, which are inseparable. Explaining "the meaning of these gods is very difficult".  And it is clear, that a simple explanation cannot describe all aspects of these "Concepts".
God Elohim – it is "World forces of three inseparable Energies":
Energy of Gravity – it is Force of Compression and Preservation of the structure of Objects.
Energy of Time – it is Force of Stretching, that creates the "Space of action of the structure of Objects". Acts in balance against the Compression Force.
Electromagnetic Energy -  Paired Force, that fills the Space of the structure of Objects, and is capable of Interaction!
However, we do not see or feel any of these Energies!
These Energies permeate the entire Universe, and create "Eternal Movement of the Balance of all Objects in the Universe"! We see "Objects of the Universe" as "Stars - Suns", having their own planets, and acting for eternity after eternity!
Jehovah God it is the "Electromagnetic Forces" operating in all Living Organisms of nature, as "Code Information of the development of an organism through the birth of cells". The development of a person's Electromagnetic Code System determines - "Development of his Thinking System"! But even the development of the Thinking System Man", does not give him the opportunity to understand the principle of operation of the Three of the higher forces of the Universe". And therefore the understanding of the "God of the Universe" remained at the level of "Fantasies of Faith".
Only "Practical Magic of the organism", that left to people by the Atlanteans, allows you directly feel the "Stretching and Compression Forces of the whole organism", which are regulated by electrical forces of the body. And this process can be called: "Communication with God Elohim", when a person becomes a Personality!

The simplest explanation for any complex concepts in our life, this is a drawing. But how to draw the World forces inside our body, and how to depict Information Codes?
I decided to depict both Gods, as is customary in science – as understandable Symbols. 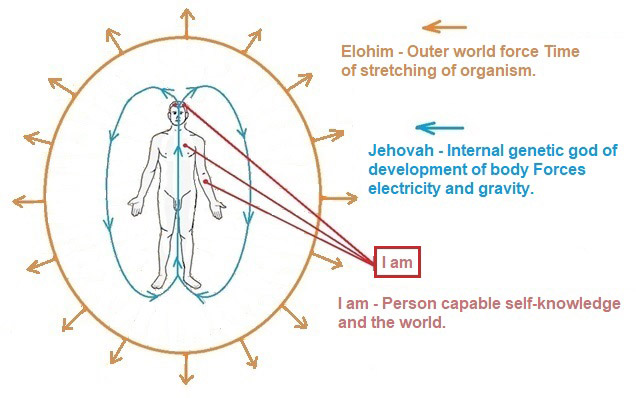 The proof, that the drawn model is the "Reality of our life", is I myself, because my Hands almost 20 years "Themselves walk around my body", charging it with energy and balancing all systems! This skill was owned by the Pharaohs of Egypt, and this skill can be learned by anyone.
All living beings of our nature and man live at the expense of the two gods "Elohim and Jehovah", constantly acting inside them. However, both gods acting in man for billions of years allow a person to become a "Personality". Where Personality is a Man, using World Forces for "Personal Perfection"! This is secret of the Atlanteans, which they left in the hope, that Humans would join others civilizations of the universe. But not in such a barbaric way, that destroyed the "protective atmosphere of the planet".
To the information, that is in the picture, about God Jehovah must be added. Since the God Jehovah, as "Genetic information" is in every cell of the body, then he "Really speaks with certain elements of the Cell", through which he carries out - "Building the Cells".
On the other hand, must understand, that a person is "Personally under the influence of Divine Forces from the Outside and from the Inside"! From the first second of your conceiving in your mother, Both Gods develop and support your body until death! It means, each person has a "Personal connection with God", in which there are not, and cannot be, Intermediaries! Nobody can interfere with your "Personal relationship with God", except you! And all the "Religious mediators of various ranks and stripes" existing in our life, demanding "Prayers and Donations" from you, are theater of deception.
People have always understood, that "Each person is a miracle in Himself," and he is a "Separate World"! And the famous Israeli poet and songwriter Shalom Hanoch, very accurately and beautifully defined: A man lives within himself! And science has clearly proven, that all people different in "Inner Genetic Code". And only "Religion", not realizing, that the Torah is a scientific book, "placed God in Heaven", and therefore distorted the concept of God of man. Though Heaven is a separate creation of God, like everything that surrounds us.
Atlanteans left "Practical Information" as each person can communicate with God. And this is "Ancient Egyptian Magic", or you can say "Yoga of the Atlanteans" in the form of "God Ptah". And god Ptah is "System development and balance of the body", that exists in every person, and it described in the Egypt section.

I hope, that the picture will make easier for readers to perceive the scientific text of Torah, and even begin her personal study.